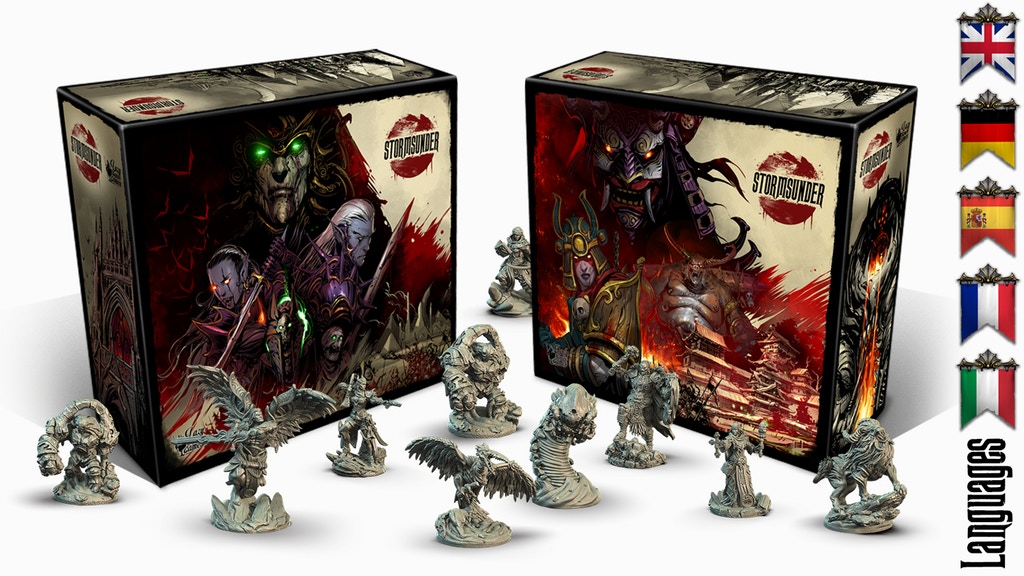 A story-based solo/cooperative RPG board game for 1-4 players with stunning miniatures, an epic adventure and exciting combat.

Latest Updates from Our Project:

We're back with a continuation of the theme from the last update, as we're finally starting to see some real (and consistent) progress on the miniatures side of Stormsunder. We have 16 new masters, the entire Heirs of Ruin terrain box, minus 2 (sorry, Discord, I misread the list). In addition, we should be receiving 6 molds worth of PVC in a week or two, which will finish off the Heirs of Ruin core box. We also received the Stormbrush samples for the last batch of PVC; you can find pictures of those at the very bottom of this update. Without further ado, let's look at some masters...

In case you forgot how great Stormbrush looks, here's the latest samples from LongPack:

That's all for now! We'll be back next month with more minis as well as news on production and whatever else is going on. Until then, we'll see you in the Storm (be sure to stay close to your shield).

We’re back with more news on production (including some juicy new PVC minis), so let’s get right to it.

We’ve reached an important milestone on our work to finish Stormsunder’s massive number of Wave 1 minis: LongPack has sent us all the remaining enhancement/disassembly files for each box. For reference of how much of a big deal this is, last update we could only say we had those files for Heirs of Ruin. It’s a drastic shift from the “one batch at time” process we’ve had prior, which was desperately needed if we ever wanted to fulfill Wave 1. Gustavo has already approved most of the files, with only a handful needing further work. With good news comes bad, unfortunately, as our miniature manufacturer has been impacted by recent COVID lockdowns in China, which may delay the production of the masters (the next step now that so many files are approved).


With that out of the way, here’s the latest batch of PVC (all from Heirs of Ruin):

I was boxing some minis for our Serbian contingent and took the opportunity to take a picture of all the minis that are ready for production. These are all PVC and in the same numbers you will receive in your Heirs of Ruin box.

That’s all for now, we’ll be back next month with more minis (I hope) and maybe some news about the paper side of production (I’m thinking the stretch goal book… did you know there’s another book?). Until then, we’ll see you in the Storm (where nothing is locked down).

Today we're going to look at the different types of locations you'll come across in Stormsunder: Heirs of Ruin. We have six types of tiles, each with their own theme that you'll use to build the maps for the encounters in the game. But first, let's talk briefly about development/production.

The short version is that both development and production are on track from the schedule we outlined late last year. Finalizing miniatures has been slower than we'd like on the manufacturer side of things, but we also kind of predicted that so nothing is too far off track at the moment to raise any alarms. We should have more news on that front in the next update as China just got back to work last week from their New Year's revelry.

The vampiric denizens of Tarpitt sacked the city and then simply moved into the homes of the people they slaughtered. The city’s architecture is a mishmash of old and new, as damaged and destroyed buildings were repaired or rebuilt into sinister structures more befitting their undead hosts. Parts of Tarpitt remain completely unchanged from before its fall, however, as the vampires’ proclivity for decadence and infighting has led to some of the city's many secrets to remain untouched to this day.

Almost the entirety of the Inali Desert rests in the shadow of the Storm. Visibility is often low, if not non-existent, making travel across its swirling sands almost impossible. Even before the Storm the desert was home to countless dangers, many of which are now more desperate or ravenous than they were before.

The cities of Inali stretch back beyond the pages of history, where myth and legend fill in the gaps for an era when events were either not transcribed or the records were destroyed. Across centuries of life there is always death in equal measure, making Inali home to the largest number of graveyards and catacombs in the world.

Tarpitt, the city of vampires, is brimming with opportunity for those desperate or insane enough to walk its streets. With no major trading partners to speak of, the city thrives on a constant flow of merchants to bring a steady stream of goods to the eager hands of its undead populace.

Unimaginable wealth rests beneath the Inali Desert, waiting for any foolish enough to bring a shovel. Treasure seekers have made little headway, especially since the arrival of the Storm, finding myrmidite and dune worm tunnels rather than the relics of Rataan or the buried city of Mokatta.

Much of Inali is surrounded by mountains, protecting its cities from outside threats while also making escape to neighboring regions extremely difficult. The areas near these mountains are now mostly uninhabited, either being too close to the Storm or its people captured or killed, as with the outskirts of Tarpitt.

That's all for now! We'll be back next month with more production news (hopefully in the form of more PVC/Masters). Until then, we'll see you in the Storm (don't get lost; there's a lot of ground to cover).

It feels like forever since we were able to show you final PVC minis, but we're finally back on track on that front, so rather than having another in-depth gameplay update we're going to have some good old-fashioned eye candy. We'll be back at the end of the month or early March to talk about production status (short version is we're still on track from our last update on that front), but for now, enjoy:


That's all for now! We'll be back at the end of the month (or early next month) to talk about development/production status and who knows what else. Until then, we'll see you in the Storm (where every jump scare could be your last).

It’s our last update of the year and we have some fun stuff to cover, so let’s get right to it!


Capac & Lady Renata Masters (the Sequel)
You may recall in the update before last we reported that the masters for Capac and Lady Renata had some issues (too large, etc). Well, we’ve received the replacements and we took the opportunity to give Capac a little upgrade base-wise. Capac was a little top-heavy which made him prone to falling over with his old base. Problem solved:

We should also be getting a pile of PVC in January (worldwide shipping crisis permitting) as Longpack has most of the molds for the base game scheduled to be done by the end of the year.

We’ll be doing another round of card-charging in BackerKit the week of January 10th. If you don’t want to be charged yet (as we are not closing the PM until later in 2022) and you’ve finalized your order already, please reach out via Kickstarter private message or sending an email to support@lazysquire.games.

Aleksandra won the equipment poll, so we’re going to take a look at some ways you can equip her, level by level. This is by no means a typical playthrough (it’s very unlikely you’d cycle through all your equipment each level and we wanted to show lots of equipment cards). Think of it as a multiverse of equipment possibilities and enjoy some never-before-seen equipment.

We’ve been toying around with running a “miniatures only” campaign for a couple years now as our sculptors are perpetually ahead of our designers and testers (if for no other reason than most of sculpts need to be finished before the campaign). That idea has become a reality with our collaboration with MiniWarGaming, and thus Ravaged Star was born. Ravaged Star is line of miniatures to be used as proxies in wargaming and other sci-fi board games (or just to have and paint). The preview page for the first faction, the Veil-Touched, can be found here.

If you follow the campaign before launch (and pledge, mind you) you get the Lord Tyrach miniature for free:

No game is currently planned for this, so don’t worry about us stretching ourselves across another project. This campaign won’t interfere with the production of Stormsunder or Wild Assent either; all the sculpts for both games are done and we’ve scheduled the projects in such a way that the miniatures won’t cross paths on the manufacturing side of things either. This isn’t our first collaboration with other studios, so don’t be surprised to see our name floating around as we leverage our amazing sculptors and artists on other projects while our design & testing teams crank out Stormsunder and Wild Assent content.

That’s all for now! We’ll be back next year with more plastic people and game/card reveals. Until then, we here at Lazy Squire Games hope you have a safe and happy holiday season and we’ll see you in the Storm (if you come across the twins, you may want to jingle all the way out of there).